Pastel Witch Magic: A Review of the Custom Experience From MeltedKittenCreations 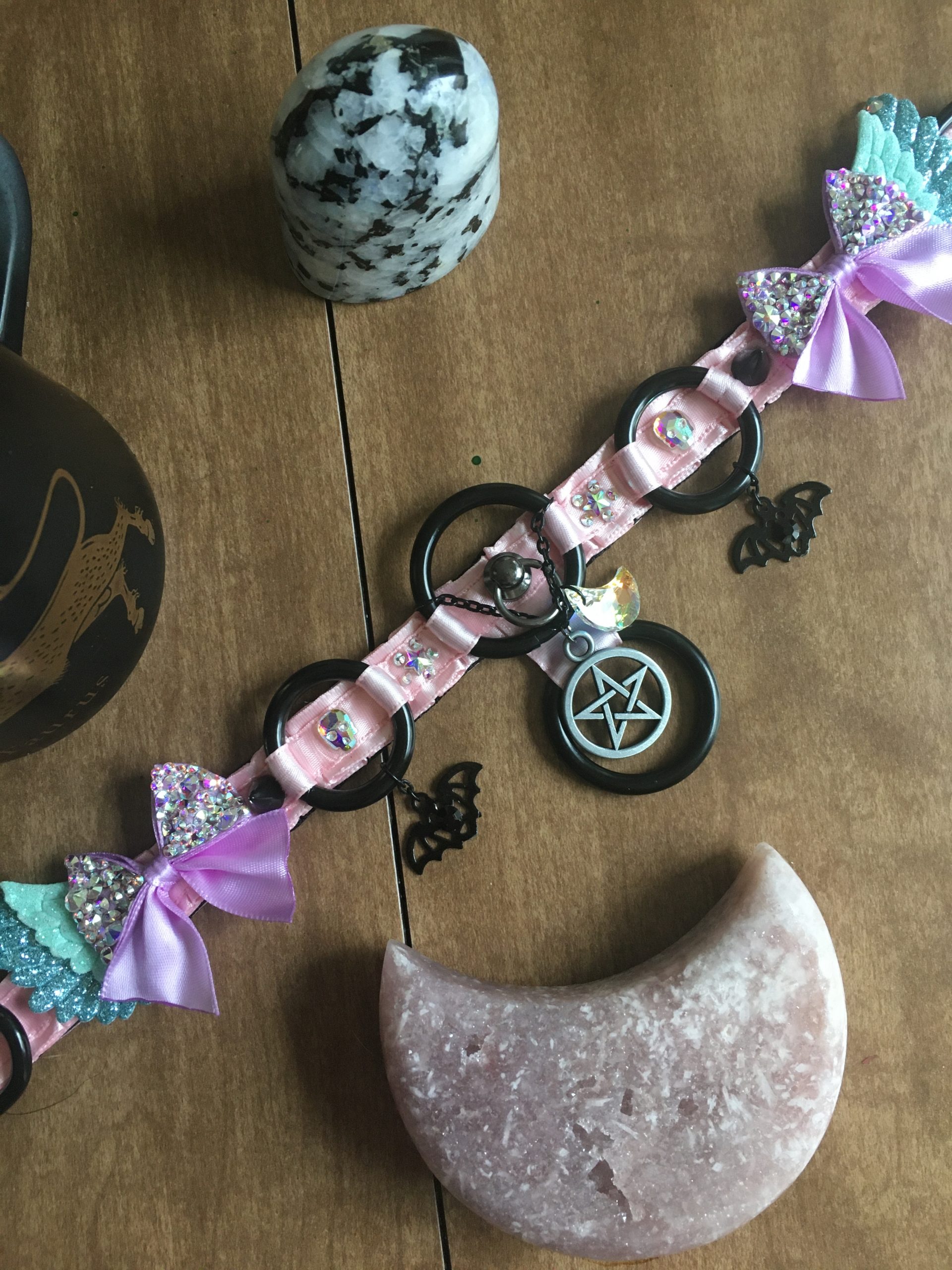 Having been in the kittenplay community for nearly half a decade now, I had known of Carissa’s shop since its infancy. It wasn’t until the past year or so, however, that I really became mesmerized by and started collecting the gorgeous, intricate ribbon collars by MeltedKittenCreations. Known for unique, gem-encrusted pieces with elegant chainwork, MKC has carved its own niche in the kittenplay collar market. Despite being criticized in the past for the extravagant prices that come with the extravagant collars and particularly the signature multilayered bows, this shop‘s scheduled releases sell out on Etsy almost instantly.

In mid-January of this year, after acquiring one or two pre-made pieces from MKC, I was fortunate enough to snag a spot for a custom collar. An idea had been brewing in my brain and I knew MKC was the one to execute it! A few days later during the monthly session of Dungeons and Dragons that I participate in, I sketched out my vision and decided on the last few details. Unlike some kittenplay gear shops that enjoy taking a more vague theme and creating something based solely on that, MKC asks for a very detailed sketch of your precise desires. (Mine is pictured here.) This was a bit of an undertaking for me since I’m naturally indecisive by nature. However, with the help of reference pictures from the MKC Instagram page (taking inspiration from pre-made collars and NOT from previous customs), I managed to pull my ideas together and draw out my ideal pastel witch collar. 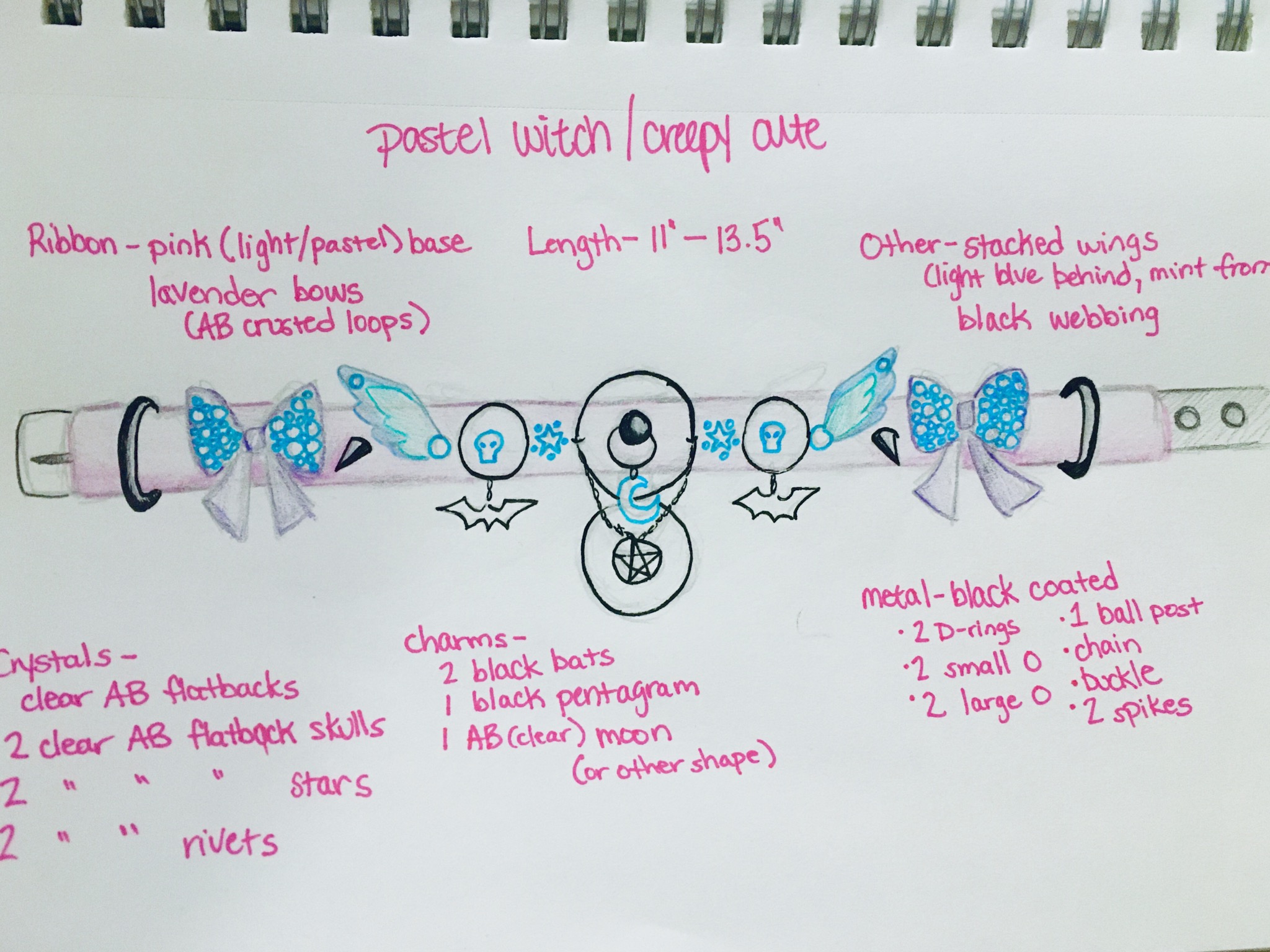 I did something daring and asked if it was possible to acquire hardware in a color that had never been used before at MKC. Luckily, Carissa explained that she has been thinking of expanding her hardware options and my custom would give her the chance to do so!

Carissa was attentive throughout the entire process. Via Etsy’s messenger system, she and I worked out details, moved things around as needed, and finalized orders for special materials. She kept me abreast of her progress the entire time. Most of the waiting time was for supplies; once everything had been delivered to her workplace she was very efficient about putting my custom creation together.

She was also confident in giving her opinion about design choices when I asked for it, owing to her expertise. Also of note is that I was absolutely stunned by the price I was quoted after the initial discussion of my idea— it was so much lower than I had expected! I had gone in with the notion that a custom creation would cost a pretty penny, and yet the price I paid was around the same as some of her elaborate pre-made designs.

When the collar was complete, she took professional photos of the finished product and asked if I’d like to see them before it had arrived to me in the mail. She also was very thoughtful and asked for my permission to post my custom on the MKC Instagram page, as we all know that copycats are out there! In my opinion, let them copy! That just means you had an idea worth reproducing, and reproductions are hardly ever as stunning as the original.

Overall, the process took exactly two months from purchase to delivery. It was so worth that wait! I tore open MKC’s signature black and gold packaging the moment it arrived and squealed with delight. My dreams had certainly come to life! If I had to give the shop and my experience a rating, it would indeed be 10/10!

Although I have yet to do a proper shoot in my custom collar, you betcha I’ll be doing that soon so keep an eye out! Love and meows,

19 thoughts on “Pastel Witch Magic: A Review of the Custom Experience From MeltedKittenCreations”